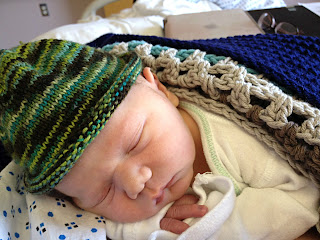 Aside from being a tasty nibble, he is quite the relaxed baby.  I felt like I was in labor forever.  But some how, despite having his cord wrapped around his neck a whooping THREE times, he managed to beat the previous 'shortest labor' record by exactly five minutes.  He likes to sleep through the night (I KNOW) and to snuggle.  This, my friends, is perfection.
Posted by A South Park Republican at 1:33 PM 5 comments:
Labels: family

Now that the new baby is scheduled to arrive tomorrow, the nesting urge has set in. Which is why I decided to organize my knitting needles. What? That's not how I'm suppose to nest? Well, the let's instead say my crazy got the best of me. 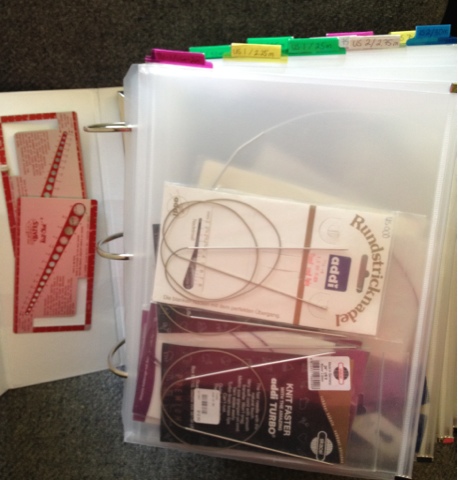 Posted by A South Park Republican at 12:33 PM No comments:
Labels: knitting

In an attempt to woo the as of yet unborn boy child out of my womb and into the world, I decided to knit him a hat and booties. I mean come on, right? Handknits? Better than my dark lumpy insides. Right? In any event, the bootie pattern that I'm using will not work on two circs. I mean it. Will. Not. Work. Perhaps it is the pattern. Perhaps it is the smallness of the booties, which yah, I've knit baby socks before so I know this isn't true. Perhaps it is me. Whatever the reason, I'm being forced to use double point and Hi! Ho! They suck. I'm forever being poked and trying to maneuver around the stupid things. This is a true act of love I've got going on over here. You hear that Schickabibble? So come on out already!
Posted by A South Park Republican at 1:52 PM No comments:
Labels: knitting

As I mentioned, my first melted bead bowl attempt was a bit of trial and error so here I am, continuing the saga. When the first bowl started to fall apart and separate, I jacked the heat and tossed it back in the oven, only to forget about it. For quite some time. Ooops! I suspect the beads were never suppose to become quite that hot and probably leached carcinogens into my oven, kitchen and habitat. But on the upside, they really and truly melted! 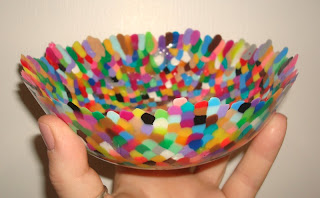 Which would explain why this bowl HOLDS WATER. Yes folks, I made a bead bowl that is so melded together that it will reliably hold liquid. I suspect this is not normal for such melty bead crafts. A few of the beads are slightly dimpled and give a hint of the fact that the colored dot was, once upon a time, a bead with a hole and not some other amorphous thing.

My kids were intrigued by the whole process, so we decided to make some more. I used the same glass bowl as the first time and made two more, taller, versions and I used a Pyrex bowl for yet another, fourth, version. The Pyrex one melted the best and most uniformly which could be because it is actually oven proof glass that heats more evenly. Or it could be because of the shape which has straight, not slanted, sides. All three of the bowls were baked at 400°F until they looked slick and slightly gooey which was about 20 mins. I took them out of the oven and immediately used a ladle, sprayed with cooking spray, to gently mush down the beads. They did not fuse into a solid substance like the first bowl, but they didn't fall apart either. Once cooled they have held together. And they look like melted beads. The big burning question now ...

WHAT IN THE HELL ARE WE GONNA DO WITH FOUR MELTY BEAD BOWLS? 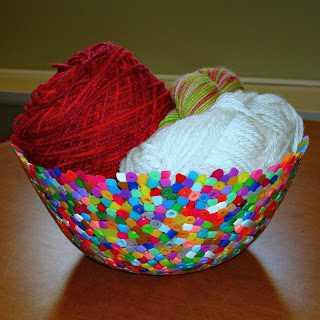 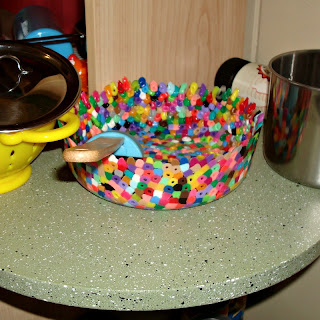 I could use them as yarn holders I suppose. But instead I have plans to ditch give away three of the bowls. And the last one? It has been assimilated into the kid kitchen. I suspect that in a few days I won't ever see again. If that is the case, well, I will just have to make more!
Posted by A South Park Republican at 9:22 AM 2 comments:
Labels: craft

While not an addict, per se, I do find myself checking out all things Pinterest once (or twice) a day.  Every so often I see a project, or a nail polish, that grabs me and forces me into immediate compliance.  As was the case with the melted bead bowl.  Now, I know me, and I know I often have big visions and shite results (Turkish Bed Socks I'm looking at you!), so I bought the inexpensive rainbow assortment of melty beads (as opposed to the more tonal colors) and figured if I hit this out of the park then I'd dump the rainbow stuff on the kids and go get me some tonal goodness.
I followed the directions from as explained in the link above, which were not super detailed, but adequate.  I preheated my oven to 350° F.  Then I went in search of a bowl.  When I found that my Pyrex bowl was dirty, I picked out another glass bowl which I assumed would be oven proof (this assumption proved correct ... whew).  I sprayed that sucker with Pam cooking spray.  Like a lot.  That baby was lubed up.  In fact a little puddle formed at the bottom.  I was worried about the Pam puddle but decided to boldly go forth and ignore it.  Then I dumped in a hand full of beads.  I added a hand full at a time until the bottom was covered.  And then I thought, "SHIT!  Are these all suppose to be oriented in the same way so that they are all side up or hole-end up??"  A glance at the Pinterest picture lead me to think that orientation was not an issue (much like it should not be an issue in marriage, but I digress), and I carried on.  I rotated the bowl and added more beads and pushed down any that rolled to the bottom.  It took some time but eventually I had it up the sides in one even, though not samely oriented, layer. 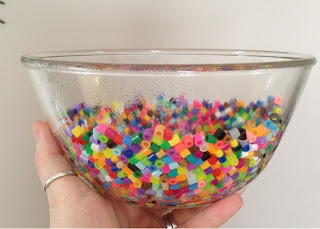 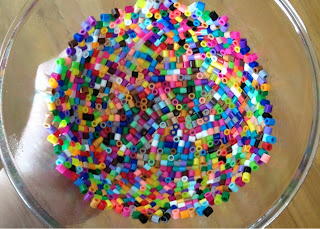 And I was ready to approach the oven.  I decided to put my bowl on a cookie tray so that if there was a mass meltdown it, just maybe, might be contained on the tray. Then I baked it.  For ten minutes.  And it still didn't seem melted.  So I took it out, wrapped a ladle in wax paper and mushed the whole thing down.  Then I baked it at 400° F for another five minutes.  Then I set it on the counter to cool.  It popped out no problem, though it was very Pam-tastic and slimy. 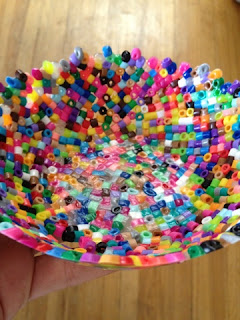 At first blush this looks like a great bowl, yes? WRONG! Rotate the bowl and you'll see ... my fingers? 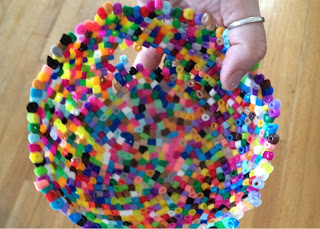 I done lost a chunk of my bowl! And there is there is a line, or fissure, where the sides and bottom don't meet up. 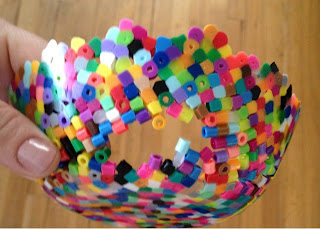 The actual bottom of the bowl seemed to really have melted and my wax paper ladle mashing seemed to have bonded those puppies together.  So I decided to give this bowl another go.  I rePammed my glass bowl, put the bead bowl back in, replaced the chunk that fell out, added some extra beads on top, put it back in a 400° F oven, started typing up this blog post, and totally forgot about the bowl.  A quick check just revealed some of the beads are LIQUEFIED.  Whoops! I feel like this most recent rendition is going to take quite some time to cool. So, you know, to be continued.
Posted by A South Park Republican at 3:08 PM No comments:
Labels: random

I have an uncanny ability to pick out truly unflattering nail polish.  I've done this for years.  At best I will polish up and look like I have a circulatory problem.  At worse, I'll look like a corpse.  Granted it is just corpse hands, but considering how often I look at my hands (doing the dishes, changing diapers, you know doing the glamorous things in life), it is irksome.  Now I KNOW I do this. So I am always careful when I buy pricey nail polish.  Nonetheless I have ended up with a few corpse inducing Butter of London shades.  Now I can add Zoya's Pandora to that list, which is not actually pricey but still.  DAMMIT!
I was at Ulta, looking specifically for this color, Pandora.  I'd seen it on Pinterest (DAMMIT PINTEREST! WHY DO YOU DO ME WRONG?) and went to Ulta to TRY IT ON.  Which I did and I thought, "Meh ... prognosis: poor circulation, $8 saved."  But then a sales clerk came over and when I explained my thoughts and the sadness I felt at looking sickly in the polish that I had come to check out, she took a look and proclaimed, "No way!  That color looks great!" At which time my common sense left my body, my brain turned off the part that should note that the sales clerk was being a SALES. CLERK. and I marched the polish up to the checkout area, handed over my hard earned $8 (for which my coupon would not cover) and bought the stupid polish.

I got home, did another Pinterest thing (melty bead bowl ... more to come on that) and then painted my nails.  This, of course, is when I realized my folly.  You know when it was too late.  When I had already dressed my nails up with Colour de Corpse.  So.  Note-to-self:  Go with your gut.  Ignore the SALES clerk.
Posted by A South Park Republican at 1:06 PM 1 comment:
Labels: note-to-self
Older Posts Home
Subscribe to: Posts (Atom)